11 spots to get your summer fill of shellfish, no bucket required

Littlenecks, clam cakes, chowder – whatever you dig most, there’s nothing quite like seafood in the summertime. Here are 11 spots that have mastered the art of seasonal fare, and earned a spot on our Clam Shack Crawl.

Blount Clam Shack
The clam cakes and chowder alone earn Blount a spot on our clam shack crawl, but two locations and a half-pound-all-lobster-meat giant lobster roll make Blount Clam Shack a no-brainer. On top of that, both their waterfront location in Warren and Crescent Park shack in Riverside offer a chance to chill out and chow down along with live entertainment on the weekends. Riverside also has the added bonus of the old-school Looff Carousel. How Many Clams?: $3-$26. 335 Water Street, Warren. 401-245-3210. 684 Bullocks Point Avenue, East Providence. 628-0485

Evelyn’s Drive-In
Don’t let his wardrobe fool you – Diners, Drive-Ins, and Dives host Guy Fieri knows fried comfort food, and he had a lot to say about Evelyn’s Drive-In when he brought his show through. In particular, he was smitten by their lobster chow mein, which takes a New England staple and gives it an unpredictable twist. Added bonus: Evelyn’s is accessible by land and by sea, thanks to its convenient boat dock. How Many Clams?: $3-Mkt Price. 2335 Main Road, Tiverton. 401-624-3100

Samantha’s Seafood
Located in Montaup Country Club in Portsmouth, Samantha’s Seafood will have essential New England summer eats – fish and chips, chowder, fried clam rolls – teed up for you once you’ve hooked and sliced your way through nine holes. Bribe your golf buddies into waiving a few penalties with the promise of springing for lunch. How Many Clams?: $3-$30. 500 Anthony Road, Portsmouth. 401-683-0955 ext. 4

Chad’s Chowderhouse
Chad’s Chowderhouse takes the perfect summer food, the clam cake, and gives it a flavorful Portuguese twist. Their Portuguese clam cake spices up a classic by adding chourico into the mix, a perfect marriage of two local culinary traditions. Chad’s is nothing of not consistent – they’ve been raking in local awards for their chowder and clam cakes for years. How Many Clams?: $4-$17. 1160 Grand Army Highway, Somerset, MA. 508-672-5505 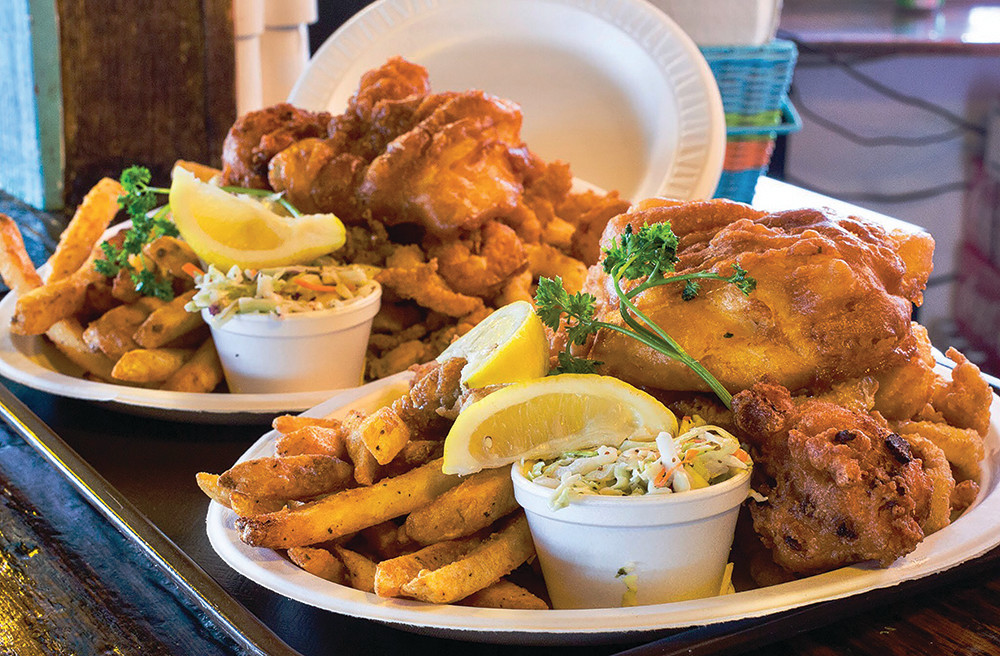 Flo’s Clam Shack & Drive-in
Flo’s got knocked down, but it got up again. Five times. Since 1936, Flo’s Clam Shack has been destroyed by five different hurricanes, but since going round-for-round with Hurricane Bob in ‘91, the shack’s been standing strong with two locations serving up fried clams and more. Flo’s Drive-In at Island Beach Park features a walk-up counter and a large tent with picnic tables overlooking the Sakonnet River. Flo’s Clam Shack in Middletown is home to an outdoor deck across from Easton’s Beach, with a fresh raw bar, all you can eat crab legs on Thursdays, and prime rib on Fridays. Rock it all like a hurricane. How Many Clams?: $3-$30. 324 Park Avenue, Portsmouth. 401-847-8141. 4 Wave Avenue, Middletown

Quito’s Seafood Restaurant and Bar
Being on a gluten-free diet doesn’t have to mean sitting on the sidelines this summer while your friends are nibbling on fried clams. Enjoy the fruits of the sea at Quito’s, with their extensive gluten-free options, including pastas and chowder. Plus, there’s no wheat in steamers or raw oysters. Enjoy it all on their large outdoor patio, complete with a breathtaking view of the sun setting over the harbor. How Many Clams?: $5-$36. 411 Thames Street, Bristol. 401-253-4500

Schultzy’s Snack Shack
There’s nothing better than capping off a big pile of seafood with ice cream and a movie, and Schultzy’s Snack Shack has both. Throughout the summer, Schultzy’s hosts an outdoor evening series featuring classic family films like Shrek, Despicable Me, and Frozen, which beg to be paired with their old-fashioned ice cream. The family-friendly atmosphere here is sure to leave both you and the kids happy as clams. Two scoops of Mint Chocolate Chip with Shrek, anyone? How Many Clams?: $3-$16. 346 Park Avenue, Portsmouth. 401-683-2663

Amaral’s Fish and Chips
Sure, there’s a lot of classic New England fare in our clam shack crawl, but what about a nod to the area’s rich Portuguese traditions? Amaral’s Fish and Chips has fish and chips and clam cakes, but they’re also serving up homemade Portuguese sweet bread on Thursdays and Fridays. Plus it’s baked in-house, which is something anyone’s vovó (Portuguese grandma) will approve of. How Many Clams?: $3-$24. 4 Redmond Street, Warren. 401-247-0675